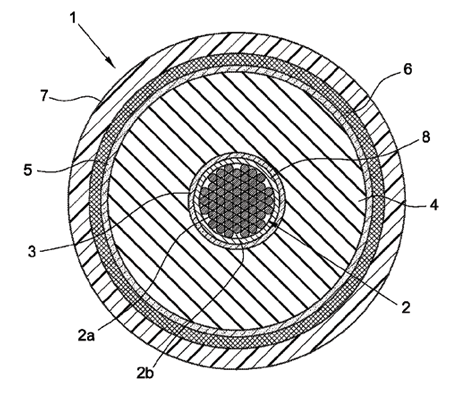 Terminal-Attached Electric Wire and Wire Harness
United States Patent 10,931,038 – Issued: February 23, 2021
Inventors: Hiroyuki Hasui, Yokkaichi, Japan; Yoshiaki Yamano, Yokkaichi, Japan; Hiroshi Sudou,
Yokkaichi, Japan; Takayasu Sugihara, Osaka, Japan; and Misaton Ueki, Osaka, Japan
Assignee: AutoNetworks Technologies, Ltd., Yokkaichi, Japan; Sumitomo Wiring Systems, Ltd.,
Yokkaichi, Japan; and Sumitomo Electric Industries, Ltd., Osaka, Japan
Provided is a terminalattached electric wire including: an electric wire having a conductor made of
aluminum or an aluminum alloy whose outer circumference is covered with an insulating layer; and
a terminal member made of copper or a copper alloy and attached to a conductor-exposed portion
exposed from the insulating layer at an end portion of the electric wire. The terminal member
includes a coating layer made of an electrically conductive material and formed at a terminal exposed portion except for a place of contact with the conductor in a surface of the terminal member, and an oxide film of the electrically conductive material formed in a surface of the coating
layer. The electrically conductive material is a metal or an alloy which forms an oxide film having a
thickness of more than or equal to 20 nm in a surface thereof.

Wire for an Ignition Coil Assembly, Ignition Coil Assembly, and Methods of Manufacturing the Wire
and Ignition Coil Assembly
United States Patent 10 923 887 – Issued February 16, 2021
Inventors: Massimo Augusto Dal Re, Concordia Sulla Secchia, Italy; Giovanni Betti Beneventi,
Modena, Italy; and Stefano Papi, Modena, Italy
Assignee: Tenneco Inc., Lake Forest, IL, USA
A wire for an ignition coil assembly and/or a corona ignition assembly is provided. The wire
comprises a wire core including a copper-based material, and a coating applied to the wire core.
The coating includes at least one of a carbon-based material and magnetic nanoparticles. The
carbon-based material can include graphene and/or carbon nanotubes, and the magnetic
nanoparticles can include graphene and iron oxide (Fe.sub.3O.sub.4). Typically, the coating includes
a plurality of layers. For example, the coating can include a layer of the graphene and/or carbon
nanotubes, and/or a layer of the magnetic nanoparticles. The coating can also include a layer of
insulating material, such as enamel. According to another embodiment, the coating includes iron,
nickel, and/or cobalt plated onto the wire core.

Flame Retardant Electrical Cable
United States Patent 10,923,246 – Issued February 16, 2021
Inventors: Franco Galletti, Casatenovo, Italy; Elena Roda, Segrate, Italy; and Giuseppe Merigo, Milan,
Italy
Assignees: Prysmian SpA, Milan, Italy, and Politecnico di Milano, Milan, Italy
A flame-retardant electric cable has a core including an electric conductor and an electrically
insulating layer. The electrically insulating layer includes a flame-retardant polyolefinbased
composition which includes, as base polymer, a mixture of at least two polyolefin homopolymers
and/or copolymer wherein at least one is a low-density polyethylene copolymer having a density
lower than 0.915 g/cm3. The flame-retardant polyolefin-based composition also includes calcinated
kaolin in an amount greater than 3 phr, a metal hydroxide in an amount greater than 10 phr, and
an alkyl or alkenyl alkoxy siloxane. The alkyl or alkenyl alkoxy siloxane is in an amount ratio of from
1:25 to 1:50 with respect to the sum of the amounts of calcinated kaolin and of the metal hydroxide.

Wire Harness
United States Patent 10,913,405 – Issued February 9, 2021
Inventor: Hikaru Omae, Yokkaichi, Japan
Assignee: Sumitomo Wiring Systems, Ltd., Mie, Japan
A wire harness that includes a wire having a first wire, a second wire that is more bendable than the
first wire, and a connection for electrically connecting the first wire and the second wire to each
other; a tube for accommodating at least one of the first wire and the second wire; and a covering
ventilation that is tubular, has a covering for surrounding the connection and a surrounding region
of the connection of the wire, and is connected to the tube.

Twisted Wire Conductor for Insulated Electrical Wire, Insulated Electrical Wire, Cord and Cable
United States Patent 10,902,966 – Issued January 26, 2021
Inventor: Hiroshi Kaneko, Tokyo, Japan
Assignee: Furukawa Electric Co., Ltd., Tokyo, Japan
This twisted wire conductor 10 for an insulated electrical wire is configured so as to be in a mixed
state in which a first conductor 20 and a second conductor 40 are twisted together. The first
conductor comprises a specific aluminum alloy: which has an alloy composition that contains, by
mass %, 0.2-1.8% of Mg, 0.2-2.0% of Si, 0.01-0.33% of Fe and a total of 0.00-2.00% of one or more
elements selected from the group consisting of Cu, Ag, Zn, Ni, Co, Au, Mn, Cr, V, Zr, Ti and Sn, with
the remainder comprising Al and unavoidable impurities; which has a fibrous metal structure in
which crystal grains extend in one direction; and in which the average value of a dimension t which
is perpendicular to the longitudinal direction of crystal grains is 400 nm or less in a cross section
parallel to this one direction. The second conductor has a higher electrical conductivity than the first
conductor 20 and comprises a metal or alloy selected from the group consisting of copper, copper
alloys, aluminum and aluminum alloys. The twisted wire conductor exhibits high electrical
conductivity, high strength and excellent bending fatigue resistance, and enables a reduction in
weight.

Nanowire and Micro Wire Fabrication Technique and Product
United States Patent 10 900 137 – Issued January 26, 2021
Inventors: Anirudha V. Sumant, Plainfield, IL, USA; Michael Zach, Stevens Point, WI, USA; and Alan
David Marten, Stevens Point, WI, USA
Assignee: UChicago Argonne, LLC, Chicago, IL, USA
A continuous or semi-continuous process for fabricating nanowires or microwires makes use of the
substantially planar template that may be moved through electrochemical solution to grow
nanowires or microwires on exposed conductive edges on the surface of that template. The planar
template allows fabrication of the template using standard equipment and techniques. Adhesive
transfer may be used to remove the wires from the template and in one embodiment to draw a
continuous wire from the template to be wound around the drum.

Electrical Cable
United States Patent 10,903,159 – Issued January 26, 2021
Inventor: Martin Huber, Obing, Germany
Assignee: MD ELEKTRONIK GmbH, Waldkraiburg, Germany
An electrical cable includes at least two wires extending side by side along a longitudinal cable
direction. The wires are electrically insulated from each other by an insulation. An electrical device is
in electrical contact with the respective wires. A flexible carrier surrounds the wires annularly in
cross section, and the electrical device is mounted on an inner side of the flexible carrier which
faces the wires.