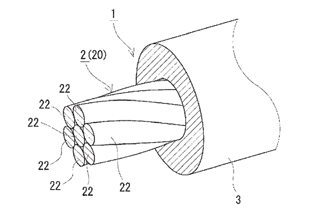 High Frequency Cable Comprising a Center Conductor Having a First Wire Stranded by Plural Second Wires that Provide Corners Free of Gaps
United States Patent 11,037,702 – Issued June 15, 2021
Inventors: Detian Huang, Tokyo, Japan and Masashi Moriyama, Tokyo, Japan
Assignee: Hitachi Metals, Ltd., Tokyo, Japan
A high frequency cable includes a center conductor comprising one first wire, which is located at the center of the center conductor, and a plurality of second wires, which are located around that one first wire, and the one first wire and the plurality of second wires are stranded together. Respective outer peripheral surfaces of the plurality of second wires constitute a substantially continuous circular peripheral surface as an outer peripheral surface of the center conductor.

Flame- Retardant Electrical Cable
United States Patent 11,031,152
Issued June 8, 2021
Inventors: Franco Galletti, Casatenovo, Italy; Elena Roda, Segrate, Italy; Giuseppe Merigo, Milan, Italy; and Sergio Gutierrez, Vilanova y la Geltru, Spain
Assignee: Prysmian S.p.A., Milan, Italy
A flame-retardant electric cable has a core including at least one electric conductor, an electrically insulating coating and an outermost layer made from a substantially thermoplastic, low smoke zero halogen flame-retardant polymer composition. The composition includes a polymeric base made of at least one polyethylene homopolymer or copolymer having a density of 0.94 g/cm3 at most. The composition further includes 60-64% by weight of a metal hydroxide, at least 2% by weight of an ammonium coated montmorillonite having average particle dimensions of from 5 to 20 μm, and a polysiloxane.

Flame Retardant Optical Cable
United States Patent 11,016,256
Issued May 25, 2021
Inventors: Zekeriya Sirin, Milan, Italy and Baris Soenmez, Milan, Itay
Assignee: Prysmian SpA, Milan, Italy
A flame-retardant optical cable is disclosed which includes a polymeric central loose tube housing optical fibres, a metallic armour surrounding the polymeric central loose tube, and a multi-layered sheath surrounding and in direct contact with the metallic armour. The multi-layered sheath includes an inner layer, an intermediate layer, and an outer layer, all made of a LSoH flame-retardant material. The LSoH flame-retardant material of the intermediate layer has a limiting oxygen index (LOI) higher than the LOI of the LSoH flame-retardant material of the inner layer and of the outer layer. Such cable has improved flame-retardant properties, particularly in terms of slowing flame propagation, heat release, droplets and emission of smokes, when it is exposed to flames during fire.

Shielded Fluoropolymer Wire for High Temperature Skin Effect Trace Heating
United States Patent 11,006,484
Issued May 11, 2021
Inventors: Wesley Dong, Belmont, CA, USA; Paul Becker, San Carlos, CA, USA; and David Parman, San Ramon, CA, USA
Assignee: nVent Services GmbH, Schaffhausen, Switzerland
A skin effect heating system for long pipelines includes a heater cable disposed in a ferromagnetic or other conductive heat tube. A semiconductive jacket contacts the inner surface of the heat tube, where the charge density of the return current carried by the heat tube is at its highest. The semiconductive jacket material has a resistivity that is sufficiently low to reduce or eliminate arcing events such as corona discharge by allowing accumulated charge on the heat tube to dissipate. The resistivity is also high enough to prevent the return current from flowing into or through the semiconductive outer layer, so that heat production capacity of the system is maximized.

Shielded Electrical Cable
United States Patent 10,998,111
Issued May 4, 2021
Inventor: Douglas B. Gundel, Cedar Park, TX, USA
Assignee: 3M Innovative Properties Company, St. Paul, MN, USA
A shielded electrical cable includes conductor sets extending along a length of the cable and spaced apart from each other along a width of the cable. First and second shielding films are disposed on opposite sides of the cable and include cover portions and pinched portions arranged such that, in transverse cross section, the cover portions of the films in combination substantially surround each conductor set. An adhesive layer bonds the shielding films together in the pinched portions of the cable. A transverse bending of the cable at a cable location of no more than 180° over an inner radius of at most 2 mm causes a cable impedance of the selected insulated conductor proximate the cable location to vary by no more than 2% from an initial cable impedance measured at the cable location in an
unbent configuration.