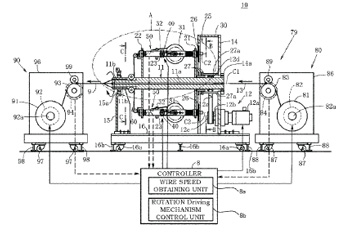 Steel Wire for Spring
United States Patent 11,143,257
Issued October 12, 2021
Inventors: Takafumi Uwano, Itami, Japan; Takeoshi Sasaki, Itami, Japan; and Takao Yamazaki, Itami, Japan
Assignee: Sumitomo Electric Industries, Ltd., Osaka, Japan
A steel wire for a spring includes a steel wire that has Ca or Na adhered thereto in an amount of 0.2
g/m2 or less. The steel wire has an oxide film on a surface thereof, and the oxide film has a thickness
of, for example, from 2.0 to 20 μm.

Method of Testing a Fire Resistant Coaxial Cable
United States Patent 11,145,440
Issued October 12, 2021
Inventor: William E. Rogers, Danville, CA, USA
Assignee: American Fire Wire, Inc., Minden, NV, USA
Methods of testing and installing fire-resistant coaxial cables are described. The dielectric between the
coax cable’s central conductor and outer coaxial conductor ceramify under high heat, such as those
specified by common fire test standards (e.g., 1850°F/1010°C for two hours). The dielectric can be
composed of ceramifiable silicone rubber, such as that having a polysiloxane matrix with inorganic
flux and refractory particles. Because thick layers of uncured ceramifiable silicone rubber deform
under their own weight when curing, multiple thinner layers are coated and serially cured in order to
build up the required thickness. A sacrificial sheath mold is used to hold each layer of uncured
ceramifiable silicone rubber in place around the central conductor while curing. The outer conductor
can be a metal foil, metal braid, and/or corrugated metal. Another layer of extruded ceramifiable
silicone dielectric or an outer wrap of ceramic fiber yarn surrounds the outer conductor and continues
to insulate it from the outside if a low smoke zero halogen jacket burns away.

Flexible Cable with Structurally Enhanced Conductors
United States Patent 11,145,433
Issued October 12, 2021
Inventor: Richard Temblador, Temecula, CA, USA
Assignee: Southwire Company, LLC, Carrollton, GA, USA
In an electrical cable of the type having an outer sheath enclosing a conductor assembly comprising a
plurality of insulated conductors disposed within a binder, the binder having a crush resistance for
protecting the insulated conductors, an improvement in which a strength enhancer is applied such
that the binder can be removed without decreasing a crush resistance of the electrical cable.

Steel Wire Rope, Elevator Provided with Steel Wire Rope, Lubricant for Steel Wire Rope, and Use of
Lubricant for Lubricating the Steel Wire Rope
United States Patent 11,136,713
Issued October 5, 2021
Inventor: Raimo Pelto-Huikko, Helsinki, Finland
Assignee: Krone Corporation, Helsinki, Finland
A wire rope is disclosed that comprises metal wires, preferably steel wires, as a load-bearing material, which rope comprises at least one or more strands laid from said metal wires and which rope is lubricated with a lubricant. Another object is the use of the aforementioned lubricant for lubricating a
steel rope. The lubricant comprises at least oil and powder substance, which powder substance
comprises at least particles whose hardness is greater than 4 on the Mohs scale. A traction sheave
elevator comprising such a wire rope as a suspension rope is disclosed, too.

Wire for Medical Device and Medical Device
United States Patent 11,123,525
Issued September 21, 2021
Inventors: Naoyasu Hanamura, Tokyo, Japan; Hiroaki Kasai, Tokyo, Japan; Hisamitsu Kuwabara, Tokyo,
Japan; Kohei Shiramizu, Kawasaki, Japan; and Takuya Fujihara, Tokyo, Japan
Assignee: Olympus Corporation, Tokyo, Japan
A wire for a medical device includes a wire body and a solid lubrication film. The wire body has an
outer circumferential layer formed of a plurality of metal strands that are twisted with each other. The
solid lubrication film is formed at least on outside exposed surfaces of the plurality of metal strands. When a virtual circle as a smallest circle enclosing the outer circumferential layer is assumed in a cross
section perpendicular to a central axis of the wire body, a part of an outer edge of the solid lubrication
film of the cross section is inside the virtual circle and a cross-sectional area of the solid lubrication
film in the cross section satisfies A/B>0.7 where A is a size of a portion outside the virtual circle and B
is a size of a portion inside the virtual circle.