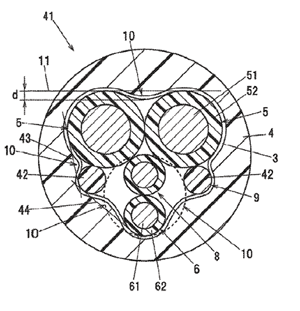 Flame Retardant Fiber Optic Cable with Halogen Free Sheath for Blowing Applications
United States
Patent 11,256,052
Issued February 22, 2022
Inventors: Michael Alexander Heinz, Berlin, Germany; and Ravinder Kumar Kinnera, Berlin, Germany
Assignee: Corning Research & Development Corporation, Corning, NY, USA
Embodiments of the disclosure relate to an optical fiber cable. The optical fiber cable includes a subunit
having a first interior surface and a first exterior surface. The first interior surface defines a central bore
along a longitudinal axis of the optical fiber cable. At least one optical fiber is disposed within the central
bore of the subunit, and a plurality of strengthening yarns is disposed around the subunit. A cable sheath
disposed around the plurality of strengthening yarns. The cable sheath has a second interior surface and
a second exterior surface. The second exterior surface defines an outermost surface of the optical fiber
cable. The cable sheath includes from 55% to 68% by weight of a mineral-based flame retardant additive
and from 35% to 45% by weight of a polymer blend. The polymer blend includes a co-polyester or copolyether and a polyolefin or a polyolefin elastomer.

Cable with Aerogel Dielectric
United States Patent 11,250,974
Issued February 15, 2022
Inventor: Jason Wong, Aurora, CO, USA
Assignee: Fractal, Inc., Aurora, CO, USA
The present invention is a cable made from a braided polyethylene terephthalate cable sleeve. Inside the
cable sleeve is a sequence of four shielding layers: a braided copper wire layer, a braided silver-plated
copper wire layer and two braided carbon fiber layers. Within the fourth shielding layer is a
polytetrafluoroethylene inner sleeve containing a particulate aerogel dielectric, with an approximate
particle diameter from 2 μm to 1.2 mm, and a conductive metal core with a mirror polish.
Optical Fiber Cable and Manufacturing Method of Optical Fiber Cable United States Patent 11,249,272
Issued February 15, 2022
Inventors: Fumiaki Sato, Osaka, Japan; and Kuushin Ryan, Osaka, Japan
Assignee: Sumitomo Electric Industries, Ltd., Osaka, Japan
An optical fiber cable includes: a plurality of ribs formed along a longitudinal direction of a cable; and a
slot core in which a slot grove for housing an optical fiber ribbon is formed between the ribs. In the slot
groove, a plurality of optical fiber ribbons is bundled and a plurality of subunits whose periphery is
wound with a bundle material are provided, and the bundle materials between the plurality of subunits
are bonded to each other.

Wire, in Particular for a Stranded Wire
United States Patent 11,248,340
Issued February 15, 2022
Inventors: Yucel Sahiner, Nuremberg, Germany; and Markus Schill, Munich, Germany
Assignee: Leoni Kabel GmbH, Roth, Germany
A wire (10) is disclosed. Said wire (10), when viewed in cross-section, has at least one first portion (12) and
at least one second portion (14) that are interconnected by a third portion (16) in which the wire (10) has
a reduced cross-section.

Electric Cable
United States Patent 11,222,737
Issued January 11, 2022
Inventors: Christoph Studer, Gretzenbach, Switzerland; and Geraldine Studer, Gretzenbach, Switzerland
Assignee: Studer Aeronautical AG, Daniken, Switzerland
An electric cable for supplying power to aircrafts, rail vehicles, motor vehicles, ships or other devices is a
single or multi-conductor cable and includes one or more current conductors with at least one insulation.
A single or multi-layer outer casing is distributed over the periphery and is associated with the outwardly
protruding reinforcing elements. The reinforcing elements are in the form of cooling ribs protruding
preferably over the entire periphery of the cable and enable the surface of the cable to be increased and
as a result, improve heat dissipation. The projecting reinforcing elements considerably reduce the risk of
burning when the current conductors heat up and also to protect the cable against abrasion. The
invention also relates to a plug for the electric cable.