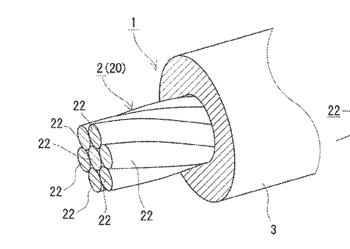 Assignee: LS Cable & System Ltd., Anyang-si, South Korea Provided is a power cable, and more particularly, to an ultrahigh- voltage underground or submarine cable. In detail, the present invention relates to a power cable which is capable of effectively preventing a decrease in dielectric strength due to penetration of copper powder from a copper conductor into an insulating layer, thereby increasing the lifespan thereof, is capable of preventing damage to insulating paper, semiconductor paper, etc. even when repeatedly bent and unfolded, thereby maintaining an interlayer structure formed by winding the insulating paper, the semiconductor paper, etc., and is capable of improving bendability, flexibility, installability, workability, etc.

Articles made from a moisture-crosslinkable, polymeric composition comprising in weight percent based on the weight of the composition: (A) 10 to 99.99 wt% of a nonpolar ethylenic polymer grafted with silane functionality (Si-g-npPE), the npPE having the following properties before grafting: (1) a vinyl content of 0.2 to 0.7 per 1,000 carbon atoms, (2) a melt index of 1.5 to 7.0 dg/min, (3) a density of 0.913 to 0.965 g/ cc, and (4) a molecular weight distribution (Mw/Mn) of equal to or less than 8; (B) 0.01 to 20 wt% of a silanol condensation catalyst; and (C) 0 to 70 wt% of a flame retardant additive; exhibit one or more of desirable (a) silane grafting efficiency; (b) hot creep performance as a cable jacket/insulation after moisture crosslinking; (c) retained dielectric strength after glancing impact as a moisture crosslinked cable construction; and (d) crush resistance as a moisture crosslinked cable construction.

It is disclosed a process and an apparatus for manufacturing a figure of eight cable. An extrusion head has separate extrusion dies extruding in parallel a first and second outer sheath around a first and second core, respectively, so as to provide two separate cable elements having respective longitudinal axes laying in a first plane. While the outer sheaths are in a softened state, the cable elements are passed in parallel through a twisting die which causes their longitudinal axes to lay in a second plane forming a predetermined twisting angle with respect to the first plane. This twisting causes the outer sheaths to join together, thereby forming a figure of eight cable.

Armored Cable and Connection for the Same