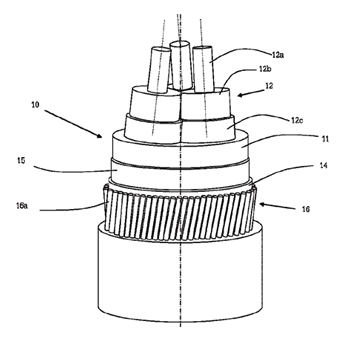 Cold Rolled Steel Wire, Method and Reinforcement of Flexible Conduits
United States Patent 11,408,049
Issued August 9, 2022
Inventors: Sylvian Foissey, Meximieux, France; and Gaelle Bascourt, Viriat, France
Assignee: Arcelormittal Wire France, Bourg en Bresse, France
A cold rolled steel wire having the following chemical composition expressed in percent by weight, 0.2≤C%≤0.6, 0.5≤Mn%≤1.0, 0.1≤Si≤0.5%, 0.2≤Cr≤1.0%, P≤0.020%, S≤0.015%, N≤0.010%, and optionally not more than 0.07% Al, not more than 0.2% Ni, not more than 0.1% Mo and not more than 0.1% Cu, the balance being iron and the unavoidable impurities due to processing. This wire has a microstructure including bainite and, optionally, up to 35% acicular ferrite and up to 15% pearlite. A fabrication method and flexible conduits for hydrocarbon extraction are also provided.

Power Cable with Conductor Strand Fill Containing Recycled Crosslinked Compounds
United States Patent 11,410,795
Issued August 9, 2022
Inventors: David Horton, Lexington, SC, USA; Tyson Baker, Lexington, SC, USA; and Chris Dekonkoly, Lexington, SC, USA
Assignee: Prysmian S.p.A., Milan, Italy
A power cable and a process of manufacturing a power cable, where the power cable includes a core containing stranded electrically conductive wires that are impregnated with a water-blocking composition, wherein the water-blocking composition contains, based on a total weight of the water-blocking composition: (i) a thermoplastic polymer; and (ii) a positive amount of up to 30 wt % of a crosslinked polymer, where the crosslinked polymer is in the form of a powder having a particle diameter less than 900µm and the crosslinked polymer is dispersed in the thermoplastic polymer.

Cable System Having Shielding Layers to Reduce and or Eliminate EMI Leakage
United States Patent 11,394,156
Issued July 19, 2022
Inventors: Hecham Elkhatib, Aurora, IL, USA; Darijus Baltrukonis, Naperville, IL, USA; and Abel Almazan, St. Charles, IL, USA
Assignee: Cinch Connectivity Solutions Inc., Lombard, IL, USA
The cable attaches a first component and a second component using a quick disconnect connector pair. The cable includes a twisted pair of wires with a separate shield. A portion of the shielding near the connector is removed to expose the wires and assemble the wires to the connector. To reduce the EMI leakage, the inner shell encloses the exposed portions of the wires. In order to maintain the ground path for the shielding of the shielded twisted wire pairs, the shielding for the twisted wire pairs is connected to the shell. The outer shells facilitate the quick disconnect feature. The outer shell includes one or more slots. The slot allows a portion of the outer shell to become a cantilever beam. The beam deflects during disengagement and engagement with the outer shell.

Ethernet Cable Cross-Filler with Notches
United States Patent 11,393,610
Issued July 19, 2022
Inventors: Bradley G. Hess, Sinking Spring, PA, USA
Assignee: Berk-Tek LLC, New Holland, PA, USA
A cross filler for arrangement within a LAN cable has a plurality of twisted pair conductors. The cross filler has a body and a plurality of radially extending arms from a center point. Each of the arms has a plurality of spaced apart notches cut into the arms, the notches spaced apart along the length of the arms. Each of the notches are dimensioned allowing bending of the LAN cable without physical breakdown of the cross filler.
Optical Fiber Core Wire
United States Patent 11,385,431
Issued July 12, 2022
Inventors: Masatoshi Tanaka, Amagasaki, Japan; Yoshiki Yamakawa, Amagasaki, Japan; Hideaki Itou, Amagasaki, Japan; and Daiki Tabei, Amagasaki, Japan
Assignee: Mitsubishi Cable Industries, Ltd., Tokyo, Japan
The coated optical fiber (10) includes: an optical fiber (11) including a core (111) and a cladding (112); a first buffer layer (121) covering the optical fiber (11), and having a refractive index lower than that of the cladding (112) and a Shore D hardness of D/20.0/1 or higher; a second buffer layer (122) covering the first buffer layer (121), and having a higher Shore D hardness than the first buffer layer (121); and a jacket (13) covering the second buffer layer (122).

Tracking Metallic Wires During a Winding Operation
United States Patent 11,383,283
Issued July 12, 2022
Inventor: Joseph Timothy Clark, Louisville, KY, USA
Assignee: Clark Innovative Technologies, Lebanon, KY, USA
Methods, apparatus, systems, and computer-readable media are provided for tracking amounts of wires provided to a winding head during a winding operation of a wire distribution system. The wires can be tracked using one or more wire tracking devices that can be disposed at one or more locations within the wire distribution system. The wire tracking devices can provide information related to the amounts of wires and the types of wires being used to wind about a winding head/form. The information can be used to check for errors during a winding operation and indicate the progress of the winding operation. The information can also be used to update wire-availability data to reflect the amount of wire that has been provided during the winding operation.